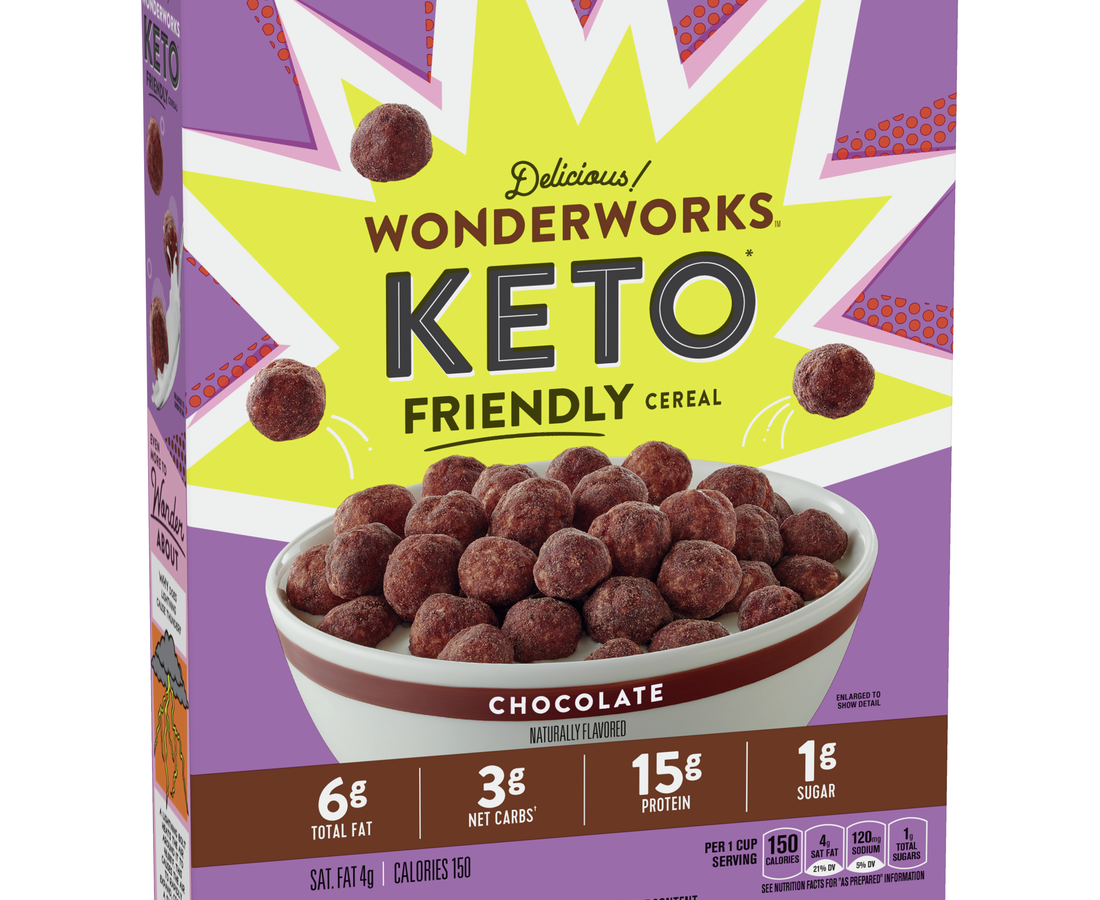 Cereal is, by default, a grain and a high-carb food, but General Mills’ Wonderworks Keto Friendly Cereal caters to keto dieters with a formula that’s low net carb, sweetened with a blend of allulose, erythritol and stevia.

Let’s talk about cereal. Pre-keto I was an “eat it right out of the box” kind of girl. Cap’n Crunch was my jam! I love the crunch of cereal but haven’t found anything in flavors I like since living the keto life. I don’t care about fruity flavors. (I said it… Come at me!)

I miss things like Golden Grahams and Cocoa Puffs. I miss chocolatey cereal. What I don’t miss is how the negative effects of loading up on cereal first thing in the morning made me feel.

What cereal can I eat on keto?

There are keto friendly cereals like Magic Spoon, Cereal School, and Catalina Crunch, but there are a few issues for me.

Some of these brands can be a bit on the pricey side. It’s hard to justify spending $10+ for cereal. Some of these keto cereal brands require you to shop on their website or buy multiple boxes at a time. We don’t eat enough of it to justify that.

We got a sample of Catalina crunch in a KetoKrate. I’m a bit salty that when I tried their “chocolate” cereal, on the package it looked like squares. When I poured it, it looked like what I described as “little rabbit turds” (True story). That’s just me being a picky human! Mike (the Hubs) thought it was good. We both really liked the Maple flavor.

When I saw that General Mills was going to have a keto breakfast cereal that I could find at Target, I got excited. It’s a lower carb count than some of the others and costs less.

The serving size is a full cup, but keep in mind that the ingredients aren’t the cleanest if you’re worried about that. This isn’t something I would eat all the time, but sometimes you want the mouthfeel of cereal and milk. (Use your favorite nut milk like almond milk or macadamia milk).

We tried the chocolate and cinnamon flavors. I am dying for some Cap’n Crunch so I can’t wait to try the Peanut Butter version. I just haven’t been able to find it yet.

The crunch is a 10 for both of us. The texture is on point but I noticed a strong erythritol cooling effect. It’s no secret I am SUPER PICKY. Hubs thought it was ok but also noticed the erythritol flavor. It had a nice cinnamon taste and I liked it better in almond milk. Out of the box it’s more of a meh for me. In milk, or mixed with the chocolate, I would eat it again.

This was a better flavor for me. Don’t go in expecting Cocoa Puffs my friends. It’s not Cocoa puffs and never will be because only the devil’s carbs can produce that flavor. Crunch was a 10, as was the texture. I noticed a hint of an aftertaste right out of the box. Mild, but picky me noticed. This was also better in milk.

Wonderworks Keto Friendly Cereal has a lot of potential. I would love to try making cereal bars with it. I’m OK with the ingredients as an occasional treat or when I need the crunch. I like that it’s a better price point and easily accessible.

Have you tried it? What do you think is the best keto cereal?